He was immovable, a statue carved of stone. Or at least he was until his head tilted, his lips parted in invitation, a warning of the impending contact.

Contact that she suddenly wanted more than anything. She needed to taste him, to feel his lips over hers.

A growl vibrated up through Ross’s chest. But his mouth hovered, almost connecting, almost claiming her lips. “Just a taste.” The air was a soft caress, while the words were gilded in iron.

Jem’s words barely filtered into her mind. Dangerous? What could be dangerous about a kiss?

“It is as it must be.” Ross’s lips covered hers. The warm connection became her whole world. The pressure was a demand but his subtly sweet flavor was decadence. His tongue danced along the line of her lips, a delightful request she couldn’t deny.

She opened to him and tasted his fire. So hot and burning… she devoured him in that moment, knowing his heart, knowing he was killing her, poisoning her with every sweet lick.

Slowly the kiss came to an end. Ross was holding her tight against his chest, supporting her whole weight, which was good because her legs hung useless and weak and her bones ached all over. “Help me…” But why would they? They’d been the ones to kill her. “Why?” She blinked, trying to clear her blurring vision.

“Listen to me, Caitlin, you have to drink from me now. Without my blood you will die.”

“No…” Something about poison. If his kiss could burn through her, what would his blood do? The blood, it would kill.

“Not our blood. My blood will save you.” He buried her face against the warmth of his neck. The corded muscles felt so healthy and strong. The steady throb of his blood pumping sounded like salvation.

But was it all a lie?

“Please trust me. I’d not have pushed the issue if I’d known you were this stubborn.” Ross’s voice held a soft brogue that vibrated through her lips.

She was dying. She’d done it before. She knew the sensation as each body system shut down, one at a time. The helplessness was unbearable. Drinking from him might save her, but if not maybe she could take him with her. She jerked, plunging her fangs into Ross, taking all he had to give.

This First Kiss Friday is from the Acacia series. Available in ebook at Changeling Press and now also in a print collection at Amazon!! 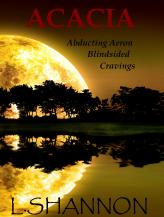 But not long after the colony began, it erupted with violence and fell into a civil (or not so civil) war between humans, vampires and werewolves. The massive bloodshed was ended with the Acacia Treaty which divided the two surviving races. Humans held Rahla and vampires were exiled to the domed moon colony of Acacia.

The treaty is resented by both sides and war may return at any moment.
Acacia III: Cravings
The virgin queen has a new desire...or two.
Hate crimes against vampires pose a rising threat to the moon colony of Acacia. Subversive attempts to destroy the colony are almost certainly being directed by the human purists on Rahla. Acacian agents have been murdered, and now their blood supply has been tampered with.
Counter intelligence operations have led to the capture of two werewolf warriors, more dangerous than anything either side has ever seen before. With their worlds on the brink of war, Queen Caitlin will do anything to protect her people, even if it means bartering her body to a pair of killers. But will her submission be enough to buy their loyalty?

Want to know a little more about the Acacia series? You can find excerpts and related books here. Don't forget to check out my other First Kiss Friday posts. Or just stop back in on Fridays.