It may still be January and around here winter is cold and cruel, but I'm looking forward 2 weeks to when for at least one day, flowers will abound and warmth and love will flow in all directions...

Or some such crap.

Valentine's Day has for me been a day of disturbing horrors. When young (er) I had boyfriends who would attempt to bring that special feeling into the day (in the hopes of getting laid, I'm sure) and now I have a wayward husband who is terrified of the expectations he believes the day has. I think the vast majority of folks miss out on the potential of the holiday. And in the spirit of this belief, I will offer a contest with the focus on putting the positive back in the this one day of romance.

To enter the contest... share some Valentine's Day from your past (good bad or other) or make one up that you'd like to have in the future. REPLY TO THIS POST TO BE ENTERED. The winner till be drawn on February 14th and receive my first *Gift of Synn* party set. Despite the name it's not all that naughty but includes lots of little extras to add a little romance to your life.
As an added bonus... If there are 50 or more entries, I will throw in a $20.00 gift certificate to Sexy Vices http://www.sexyvices.com/ ,
I'll update this just as soon as I get pictures of the set uploaded. :) In the meantime, get those stories in and get entered.

Shannon
Don't forget to check out my latest release, Blood Reign, about a couple sexy demons. Maybe I can talk a few of my heroes and heroines into posting their Valentine's Day stories too...
at 11:51 PM 19 comments: Links to this post 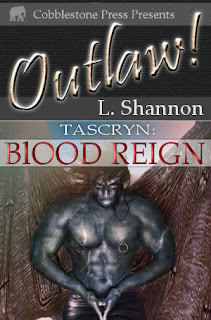 New Release: BLOOD REIGN!! (Current mood: giddy )
Hi everyone! I have a new book coming out on Friday! So I thought I'd share a little bit about the book.
Tascryn: Blood Reign
L. Shannon
Genre: Paranormal
Release Date: January 19, 2007
WWW.COBBLESTONE-PRESS.COM

Sadrina is destined to reign as Queen in hell, but she isn't about to be mastered by its current ruler. Pahele can control the demons and the very essence of hell with a mere thought. Yet, he's met his match with the one demon who rules his heart.

Blood Reign is a sequel to OF BLOOD AND BLESSINGS which you can buy at Changeling Press !
EXCERPT from Chapter One
Pahele shuddered as his realm shifted and came into balance once more. The returning balance could only mean one thing.
His queen had returned at last.
"Master?" Sadrina entered the throne room and knelt before him in absolute submission. She was as beautiful as ever. Her sensual presence filled his senses. The mere fact that she knelt before him in the realm she had once called home, told him clearly that she was desperate.
Hell simply wasn't the same without her, but what was it that had finally brought her home? He reined in his physical response and opened his mind to her. As had always been, the connection supplied all that was lacking in his soul. His essence pulsed with power. He couldn't let her leave him again. No matter what brought her back, he would bind her here, to his side.
For a longer excerpt check out...
http://www.lshannon.net/TASCRYN/BloodReign.html
And be sure to stop by the Cobblestone Press Chatroom at 9 pm EST on Friday, January 19, 2007 for their weekly release chat. I'll be there and giving away a free copy of Blood Reign!
aeshlyn avayla
Shannon
http://www.lshannon.net/
at 2:31 PM No comments: Links to this post